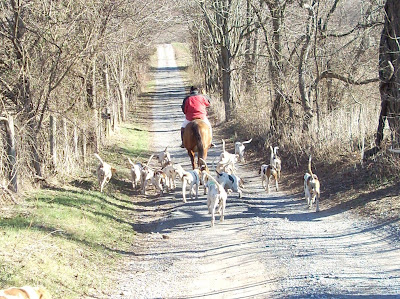 Down the farm road! 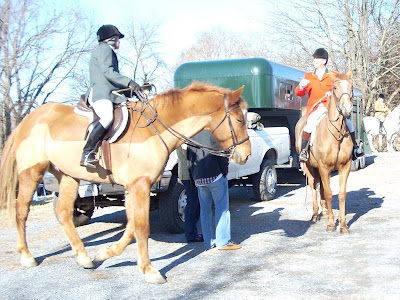 It's a bit strange to shave a horse! 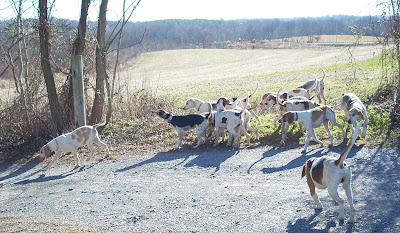 A quick pee before the start.


Chris and I went out hunting yesterday, and as we came back to where we had parked the trucks, a load of horses and about 20 hounds were unloading for a day of fox hunting over the same land we had just walked.

The horses were a mixed lot: a huge Percheron, a couple of Warmbloods, a Paint, a couple of ponies, and a few other horses of varying quality, including one with ears like a mule. All were clearly loved and well taken care of, though I think shaving a horse in winter (so it does not over-heat while riding) is a bit strange. But what do I know? Nothing about horses!

The hounds were an even-looking lot and seemed very well taken care of, and packed up rather nicely considering they went from road vehicle to trail without more than 30 seconds to pee.

I gave the Master of the Hunt my card, noting that the next time they located a fox, they could call me on my cell phone, and I would walk over from where I was parked in order to bolt it out for another run.

That's a bit of an inside joke, of course: In the U.S., mounted fox hunting is mostly chasing after the hounds, and the fox is never dug to, and can generally get to ground any time it wants. There's certainly no shortage of groundhog holes for a fox to escape to!

I suspect most of these American riders had never seen working terriers, and we certainly had a bobbery pack for them to take a look at: an ancient Border Terrier, a Jack Russell Terrier, and a pair of Patterdale Terriers that looked like a matched set of salt and pepper shakers.

We also had a little game with us -- a 16.5 pound raccoon that had lost its tail sometime in its life, and whose teeth were now worn down to almost its gums.

We had been looking for fox of course (perfect weather for it), but had drawn a blank on Mr. Reynard. We were happy to come across the raccoon though, and it was good experience for Moxie who found it as we were coming back to the truck, and who worked it sensibly the whole time. Excellent!
.
Did I mention we had a fun time in the field? True! The dogs did too, of course.