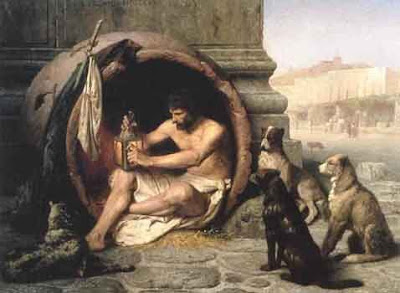 Study what man has done to dogs, and you can become a bit cynical about humans.

Which is not an accident.

It turns out that the word "cynic" refers to dogs.

The term was coined by the Greek philosopher Diogenes who noted that dogs judged men and situations by what they did rather than what they said.

Diogenes recognized that many of the social values and institutions of humans are the product of little more than corrupted theory untested in the real world.

Diogenes went on to note that many social conventions were simply put in place to demonstrate power by a controlling authority, such as government or church. People simply followed on, parroting what others said, and conforming to power in order to achieve social status and approval.

Was Diogenes a crank?

This was a man who lived in a earthenware cistern and was known to urinate and defecate in public (he maintained they were natural actions). Plato called Diogenes "a Socrates gone mad," while for his part Diogenes said Plato's lectures were a waste of time. Later, when Plato defined Man as a "featherless biped," Diogenes plucked a chicken clean of all feathers and brought it into Plato's lecture room with the words "Here is Plato's man." Somewhat reduced, Plato was forced to add to the definition, "having broad nails."

To some degree the battle between Diogenes and Plato is still being waged today.

The Kennel Club's definition of beauty is a Platonic Ideal -- one in which the dogs in the ring are compared to a picture, and theory is used to conjure up a "standard" which has nothing to do with canine health or function.

The result, Diogenes would note, is not natural, is almost entirely arbitrary, and is often evil -- dogs that are being bred with high and rising rates of physical pathology ranging from defective hearts to shattered hips, and from wrecked eyes to cross-wired brains and diseased livers.

And yet for decades nothing has been done.

The various Kennel Club hierarchies have whistled past the dogs that cannot walk, cannot breathe, cannot reproduce on their own, and who endure shortened lives lived in pain.

Diogenes would not be surprised at that outcome. In his day he noted that men often saluted what was conventionally deemed evil, while often ignoring -- or even encouraging -- things that were truly evil.

And how was this done?

Often with sophisms -- verbal tricks of the tail.

George Orwell called this "double-speak," and Stephen Colbert has called it "truthiness," but it is all much the same -- words that sound correct and which are used to confuse while seeming to illuminate.

The Kennel Club version is the nonsense phrase that "form follows function," and never mind that two dogs which have exactly the same function are given entirely different forms!

The terrier and the dachshund do the same work, but they do not have the same form.

The setter and the pointer do the same jobs, but they do not look alike.

The Corgi and the drover's dog known as the Bouvier Des Flandres once had similar functions, but they do not look a bit alike.

Has no one else noticed?

But, of course, there is no percentage in noticing, is there? Instead, people parrot the words and conform to convention, and the charade in the Kennel Club ring continues uninterrupted.

And why? Diogenes knew.

It is because humans seek the approbation of other human beings, and in so doing enslave themselves.

In their chase for the blue ribbon, otherwise smart people park their brains in neutral and mindlessly embrace conventions made up by nameless, faceless people with dubious credentials.

Never mind that the dogs are being wrecked. The people in the ring need approval, and if the dog has to suffer for that to happen, then that is the price that will be paid for the blue ribbon.