Deformity and Disease Due to Exaggeration 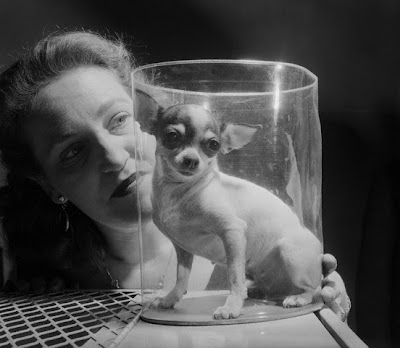 "Some Practical Solutions to Welfare Problems in Dog Breeding," was published in Animal Welfare in 1999.

Authored by P.D. McGreevey and F.W. Nicholas of the Department of Animal Science, University of Sydney, Australia, the paper correctly notes that if The Kennel Club and AKC embrace a "dogs first" approach to canine health, they are going to have to deal with some breed standards head-on and without flinching.

The reason for this is rather simple. As the authors note, "some show standards place more importance on appearance than on functionality" and "[b]reeders compete with one another to see how well they can produce phenotypes that conform to a written standard -- including traits that have, at best, questionable welfare benefits."

In short, a lot of Kennel Club dogs are selected for extreme exageration, and some breeds are very close to being little more than "freaks on a leash."

The authors give concrete examples of what they are talking about:

The following examples are taken from current breed standards. The Pug, for example, should have eyes that are 'very large, globular in shape' (Kennel Club, London 1994; FCI Standard No 253). Is it a coincidence that Pugs have a tendency to present at veterinary clinics with exophthalmoses and exposure keratitis?

For the British Bulldog, the 'skull should be very large - the larger the better' (Pre-1987 Kennel Club, London). This is a breed in which large foetal head size commonly leads to dystocia (difficulties in birthing). This same breed is also required to have curved 'roach' backs. It is perhaps not surprising that they are sometimes born with twisted spines, ie hemivertebrae.

Finally, the requirement that in Dachshunds (Wire-haired), 'the whole trunk should be long' (Pre-1987 Kennel Club, London) is surely contributing to the prevalence of prolapsed intervertebral discs in this breed.

Sometimes breed standards are confusing, blurred and contradictory. For example, the Japanese Chin is required to have a head that is 'large in proportion to [the] size of dog, broad skull, rounded in front, and between [the] ears, but never domed' (Kennel Club, London 1994). How can one achieve a broad skull, rounded in the front and between the ears, without being domed?

Similarly, the Shar Pei (Kennel Club, London 1994; FCI Standard No 309) is required to have 'loose skin' and a 'frowning expression', but function of the eyeball or lid [should] in no way [be] disturbed by surrounding skin, folds and hair', and dogs should be 'free from entropion' (rolled-in eyelids). In fact, the combination of loose skin and a frowning expression is likely to predispose to entropion.

Furthermore, breed standards can affect temperament. For example, in a breed such as the Puli which should have 'long hair [that] overshadows [the] eyes like an umbrella' (Kennel Club, London 1987), simply cutting the hair that obstructs a dog's vision can improve its temperament (Houpt 1991). Interestingly, the same breed standard describes a temperament that is 'wary of strangers'.

Scott and Fuller (1965) argued that cranial morphology has a direct relationship with brain dysfunction. Citing post-mortem evidence of mild hydrocephaly in Cocker Spaniels (American), they conjectured that, 'in selecting for skull shape, the breeders accidentally selected for a brain defect'. The breed standard (American Kennel Club 1992; FCI Standard No 167) favours a skull that is 'rounded but not exaggerated with no tendency toward flatness; the eyebrows are clearly defined with a pronounced stop' (i.e. a pronounced junction between the nasal planum and frontal bone). The combination of roundness in the skull, definition in the brow and pronunciation of the stop must have contributed to an unhealthy skull shape.

In some cases, traits that are best regarded as defects have actually been included in breed standards. For example, brachiocephaly is prompted by the standard for the Boston Terrier (American Kennel Club 1990; FCI Standard No 140) that requires an animal to be 'short headed' and to possess a 'square head and jaw' with a muzzle that 'is short, square, wide and deep . . . shorter in length than in depth; not exceeding in length approximately one-third of the length of the skull'.

The fine legs of the Miniature Poodle and the Italian Greyhound are susceptible to fracture as a sequel to jumping. The unusual conformation of their radii relative to the mass of their bodies, increases the risk that these dogs will damage themselves while performing an innate behaviour (jumping).

Even the Australian native dog is under threat, with dog fanciers showing interest in having dingoes appear in shows (Lemonick & Smith 1995). How can we improve on animals that have succeeded in a hostile environment for thousands of years? The creation of a written breed standard for such animals, and its pursuit in the show ring, speaks of either considerable naivety or arrogance.

Read the whole thing here.
.
Posted by Tanya Alvarez at 1:00 AM