A Campaign We Supported 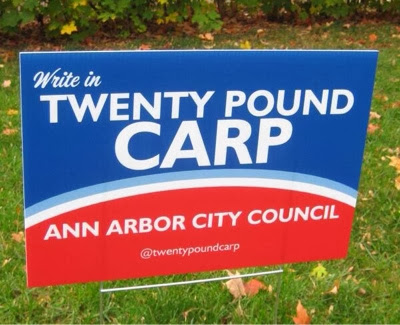 A 20-pound carp launched a write-in campaign for Ann Arbor City Council. "Elevated discussion from a bottom feeder" was the strap line.
Alas, the carp did not win.

A tinge of sorrow circulated in the putrid air of the Ann Arbor fish market Wednesday morning. In spite of a valiant effort, a 20 pound carp lost his write-in campaign to become a Michigan city councilman.

In Nov. 2012, the sizable fish was forcibly removed from an Ann Arbor pond for being too  "destructive." Always a fighter, this is when the carp found a passion for local politics.

I am not saying there was voter fraud in this election; I'm only saying something smells a little fish to me.
..
Posted by Tanya Alvarez at 10:30 AM