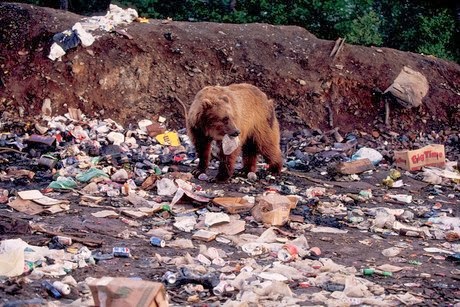 As Maggie Koerth-Baker explains, it's a heck of a lot easier to train humans to stop giving rewards than it is to successfully punish bears in a consistent and well-timed way for engaging in self-rewarding behavior. There's a lesson there for all dog trainers!

Creating a fear stimulus that makes a bear flee when confronted with (an unusual noise) is great and all, but it's also a temporary thing. That (noise) won't be there every time they encounter humans. It won't be there every single time the bear finds human food. Meanwhile, the positive reinforcement cycle that tells bears that people = food is much more reliable and constant. If you actually want to break that cycle, you have to create a new reinforcement cycle that's just as permanent as what it's trying to replace. After all, depending on the specific bear, you could be competing with a long history of training that began at birth. Carl Lackey told me that bear mothers who frequent human areas train their cubs to do the same.

In fact, the most successful reduction in bear-human conflicts is based on his principle. In the first half of the 20th century, Yellowstone National Park averaged 138 bear-caused property damage incidents and 48 bear maulings every year. It was also a time when bears were getting LOTS of positive reinforcement from human behavior. People hand-fed bears along the highways. They left food in coolers and picnic baskets where bears could easily reach it. There were even bleachers installed at local trash dumps, so people could come and watch bears eat their garbage. Generations of bears had learned — go where the people are and you will be fed.

Then, beginning in the late 1960s, Yellowstone started to change. Dumps were closed. Trash cans were bear-proofed. Rangers educated campers about securing their food and started cracking down on tourists who fed the bears. There were still problems with some of the older bears, but the younger ones learned — there’s no reward to be had for pestering people. Today, despite the fact that human visitors have tripled, Yellowstone’s bears are involved in fewer than a dozen incidents of property damage every year and average only a single mauling. In the end, the best way to retrain bears is to retrain people. 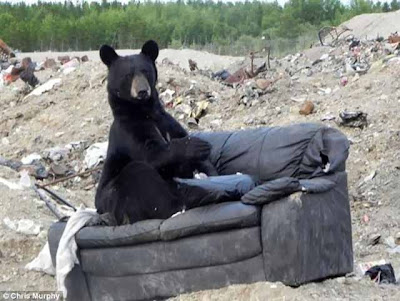 Posted by Tanya Alvarez at 7:30 AM