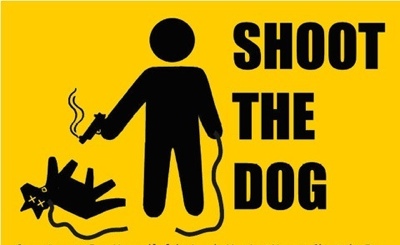 Margaret Badore is a young wannabe reporter who has managed a complete FAIL on a story for Tree Hugger.
But the FAIL is not just hers -- it's her editors too.

Let's start at the beginning.

The headline that popped up in my RSS feed was astounding: "Houston's 1.2 million dog problem"

The article said that in Houston there were 800,000 to 1.2 million dogs living in the streets.

The entire NATION only has about 75 million dogs.

An entire documentary about Houston's stray dog population parked the number of strays in the city at 100,000, and this was a documentary with an agenda.

Harris County, Texas, says about 100,000 animals a year (all kinds) are euthanized.

So where does the 1.2 million stray dog number come from? No clue. It was without source. So I asked the question on Tree Hugger in the comments section. Three times. It never appeared.
I tweeted a note to the reporter three times. On the third tweet she said it was "from the city" and "all over."

I sent two emails to the editors of Tree Hugger. No answer back.

Apparently someone, somewhere said there might be 1.2 million stray dogs in Houston (no doubt adding a zero to 120,000) and voila -- the bullshit factory churns it out, citing itself back and forth again.

But let's set aside the failing research, and the weak mathematical, intellectual and management abilities of this reporter and her editor.

If there were 1.2 million stray dogs in Houston, what would that mean?

Well, for one, it would mean that there is no "trap, spay/neuter and rehome" solution for dogs in Houston.

If it only costs $150 an animal to trap, spay-neuter, and rehome a stray dog (note it cannot actually be done for this amount), then Houston has a $150 million liability walking around on four legs out there. Since the city only spends a tiny fraction of this amount on controlling strays, and does not intend to spend more, what that means is that the ONLY cost-effective solution for all those fornicating and breeding stray and feral dogs in Houston is a hunting season, perhaps with a $5 bounty or WalMart coupon for every dog shot.  Another solution might be bait stations with professional high angle shooters in tree stands as is now being used to control deer in some communities, such as Princeton, New Jersey.

If that sounds crazy, be advised that the city of Harrisburg, Pennsylvania cranked out formal memos instructing its police department to shoot stray dogs on sight.  If you think the folks in Texas won't follow suit based on bad information, a pathological aversion to taxes, and a love of gun use, then you don't know the cowboys in the Lone Star State.
Of course, a stray dog shoot is probably not what Ms. Badore intended when she wrote her nonsense article is it? No, she intended to say that stray dogs are a BIG problem in Houston and "we" should probably do something about it.  But in running to her conclusion, she saluted bullshit. Not a lie. To be fair, liars know EXACTLY where the truth is and they work hard to avoid it. A bullshitter, however, just says and writes ANYTHING to further their argument. If it sounds good, say it. No need to think about it. No need to find a credible source.

Does that make for a pathetic example of journalism? Of course. One is left wondering if this is the kind of reporter that the Columbia Journalism School is cranking out now.

To be clear, I sent Ms. Badore a note (via twitter, as she seems to have no public email that I can find), a warning that the Internet bites back.


If you are reading this post on Thursday, it means she ignored the warning. Fair enough. But now she understands a simple point: this new era of "new journalism" does not mean there are no consequences. If she will not proctor her stories, and her crap editor at Tree Hugger (a web site that apparently relies on unsourced "facts" from Fox News!) is cloud-hidden whereabouts unknown, then the world will point out the problem.

Letting lies and bad data stand in substitute for truth and research has led to killing fields too often.  Let's not let that happen in Houston for dogs.
As for Ms. Badore's future in journalism, we shall see.  When she interviews for her next job, part of winning a chair, a desk and a phone might be a requirement she write a 650-word essay on where she went wrong on this story, and what she and her editor should have done to make it right. That would make for an interesting read!
.
Posted by Tanya Alvarez at 1:03 AM