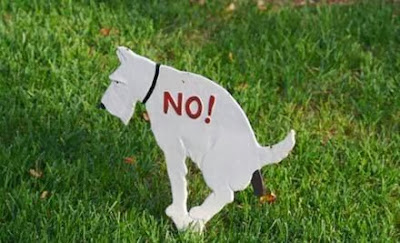 A pack of nonsense has been swallowed up by very gullible people sitting at desks, namely that grazing cows always orient north and south along magnetic lines, and that dogs do the same while defecating, and for the same reason.

The fact that people salute this stuff is amazing, since anyone with a compass, a car, and a dog can test the veracity of the thing.

Let your dog off leash and watch which direction it faces while it shits.

Spend an afternoon at the dog park and do the same thing, and if you have a "smart phone," you can even put the compass "ap" to good use.

Do the same thing.

Back in 2008, when the first report came out claiming that "cows graze along magnetic lines," it got a lot of press.

What got less press attention was the 2011 follow up analysis done by real experts in the electro-magnetic field. That study showed that the original study was complete clap-trap.

So what happened next?  Well, the folks who originally claimed cows align along magnetic lines said that half of the data from the replicate team had to be tossed out because the land sloped or there were electrical wires nearby.

Right.  Nice try, but not true.

The follow up team says it was careful NOT to look at herds near power lines or grazing on slopes. The original research was simply wrong and sloppy.

And, might I add, so what?  Most cows are surrounded by electric fencing and most land has some sort of slope to it.  You mean the "phenomenon" being "observed" in the real world cannot actually be seen without tossing out most observations?

Hello bias, and take a seat while we cherry-pick the data!

But hey, don't believe any of the researchers cited above-- drive out into the country and observe 10 or 20 cattle herds from a distance and tell me if they are all grazing in the same direction along a north-south axis.  You see?  Ridiculous.

Now watch the dogs in your local park take shits.  Is everyone defecating in the same direction and arrayed along a north-south axis?

I didn't think so!

It turns out that the folks who did the nonsense "research" on cows in 2008 are the very same folks now reporting that dogs all shit in one direction -- provided, of course, that they are shitting during that 20 percent of the day when there is electromagnetic "calm" and, of course, provided there are no power lines nearby... or any slope to the land, or .... God knows what else.

In short, what you actually see in the field with your own eyes will NOT match what they say they have "observed," because something like 90 percent of the time the conditions will not be right because the dog will be facing in the wrong direction for reasons they are only too happy to explain to you with a lot of words.